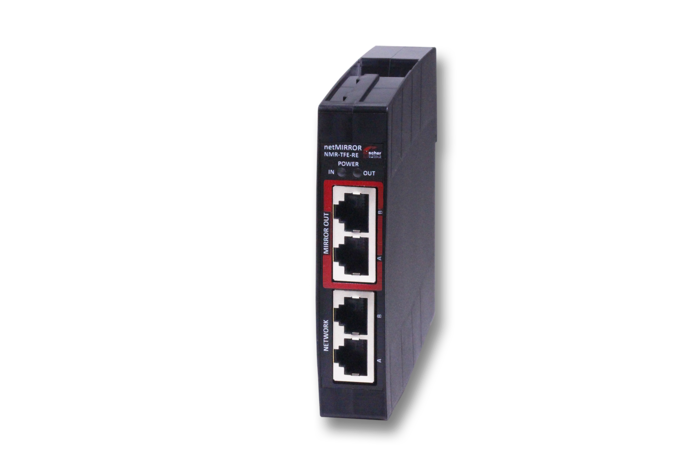 The proven Ethernet technology makes Ethernet-based industrial networks very robust against interferences. Nevertheless, unexpected trouble may also occur here, so that in case of an emergency a quick troubleshooting option must be available. In contrast to the classic fieldbus, a diagnosis device cannot simply be engaged at any point of the bus in the daisy-chained Ethernet networks, since not all telegrams can be captured at every point of the network. Usually, a network is tapped directly behind the controller. Due to the point-to-point cabling used, integrating an analysis device in an Ethernet cabling requires splitting the Ethernet connection which, in turn, causes an abortion of the communication and a standstill of the system.

To prevent the Ethernet connection from being split, the netMIRROR Test-Access-Point (TAP) allows a continuous mirroring of the Ethernet traffic without influencing the network. Usually, a permanent TAP is installed directly at the controller to allow the disruption-free connection of a diagnosis device during operation. In addition, due to their passive construction, TAPs provide protection against possible, unintended interferences caused by a connected diagnosis device or a PC for telegram recording.

Compared to switches with an activated mirror port, TAPs make sure that the timing of the network traffic is maintained and that no telegrams are discarded in case of high network loads or telegram errors.